CAVALLA IN THE NEWS 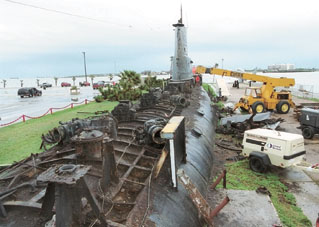 The USS Cavalla, in the process of being restored, rests on the end of Seawolf Park in Galveston. Bill Thirtle of Lake Jackson is on a mission to have it restored to its original state. (Facts photo: Kim Christensen)

By Mike Wright
The Facts

It's been a landmark in Galveston since 1971. The U.S.S. Cavalla sits high and dry on Seawolf Island, a magnet for tourists and a beacon for ferry riders. But the World War II vintage submarine needs help. Years of exposure to wind, rain and visitors have left the proud sub in need of repairs. Lake Jackson resident Bill Thirtle is working almost every weekend to help restore the ship to its former glory, nailing down planking and helping repair the superstructure. Thirtle, 66, worked at Dow before his retirement and prior to that, he spent 16 years in the Air Force.

But his first military experience came as a submariner, during his three-year stint in the Navy during the 1950s. "Subs were my first love, when it comes to duty," Thirtle said. The crew is more friendly, the pay is better, it's an adventure." Thirtle said he will never forget his first trip beneath the waves as a 19-year-old aboard the U.S.S. Blenny. "It was like an elevator," he said. "You could feel the boat jerk a little bit when the air left the tanks."

During Thirtle's tenure as a submariner, he shipped out as the Korean War ended, he didn't see any combat. "It was steady practice and training," he said, though he adds there was probably some espionage work involved. "Enlisted men normally weren't told details."

Though he never served aboard the Cavalla, he has become as fond of it as his own ship. Ex-submariners come to Galveston to help the restoration from as far away as Dallas, Thirtle said, and they all share a love of the boats. Thirtle, who works in his daughter's Oyster Creek restaurant, doesn't consider it a sacrifice to spend almost every Saturday, nailing, hauling and scrubbing. "I love showing people the boat," he said.

The Cavalla has a proud history. She was commissioned Feb. 29, 1944. On June 19, 1944, during her maiden voyage, she sank the Japanese aircraft carrier Shokaku, which launched some of the planes that bombed Pearl Harbor. The attack weakened the Japanese defense of the Marianas Islands and helped force them to retreat to Okinawa, clearing the way for the invasion of the Philippines later that year. By the time the war ended the sub had made 570 dives, covered 90,000 miles and sent 34,180 tons of enemy shipping to the bottom of the Pacific Ocean.

Today the ship designed for total submersion is totally out of the water. Thirtle estimates the boat needs from $250,000 to $500,000 to complete the deck and superstructure and restore her to mint condition.

Donations may be made to Cavalla Historic Foundation, 2100 Seawall Boulevard, Galveston, Tx. 77550.