Cavalla joined the American fleet units entering Tokyo Bay 31 August, remained for the signing of the surrender on 2 September, then departed the next day for New London, arriving 6 October 1945. She was placed out of commission in reserve there 16 March 1946. After the huge expenditures necessary during the struggle with Germany and Japan, the US government was scaling down military costs. Many Navy vessels were decommissioned and "mothballed" to save money. However, the threat and demonstrations of military and political expansion by the Soviet Union and the outbreak of war in Korea dictated a strategic adjustment. Many argued that America should never again slacken its defenses and allow an aggressive nation an opportunity to restage Pearl Harbor. Recommissioned 10 April 1951, Cavalla was assigned to Submarine Squadron 8 and engaged in various fleet exercises in the Caribbean and off Nova Scotia. Her new mission was to maintain a defensive level of preparedness.

The Soviet Union's conquest over Nazi Germany had paid handsome dividends. A wide array of technologically-advanced German design U-boats, many operational and others in various stages of completion in the ship yards, were procured. The revolutionary Type XXI U-boat, with its radical streamlining and unheard-of underwater speed of 17 knots, was taken to the Rodina for study. The Allies obtained their share of war prizes as well. Current and new American submarines would incorporate many of the features of the Third Reich's unbaptised "electro-boat".

It was clear that in order to contain Soviet naval forces there was a great need to deploy picket lines of NATO submarines at certain "choke points" around the USSR. Cavalla was placed out of commission 3 September 1952 and entered Electric Boat Co. yard for conversion to a hunter-killer submarine. Her superstructure fittings were removed or made less obstructive. Her sail was streamlined and enclosed the bridge. Additional batteries were added for increased underwater endurance. The most obvious change was the incorporation of the latest passive sonar equipment, the BQR-4 array. This Americanized German low frequency sonar unit, 20ftx10ftx10ft, was wrapped around Cavalla's bow. This necessitated the removal of two of the six forward torpedo tubes and their piping. The thinking was that early detection and advanced torpedoes with homing capabilities would offset the slight loss of firing capacity. Additional sonar gear was installed in the pump room (beneath the control room), displacing the air conditioning plant, which in turn displaced the #2 main engine (forward port side). Although ultra-quiet operation had originally been needed, the Bureau of Ships was able to modify these submarines to the point where they could listen while running equipment such as air conditioners, which improved habitability and reduced electronic maintenance. These submarines would be classified SSK; submarine hunter/killer. 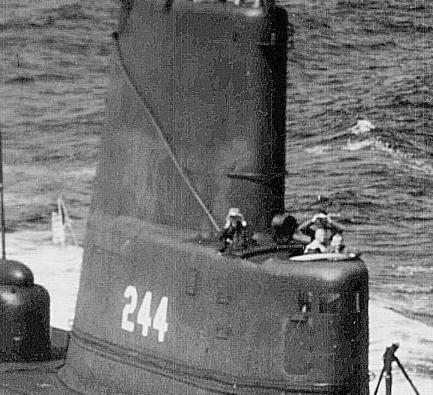 SSK submarines were to lie in wait on enemy transit routes, listening for snorkeling Russian submarines and surface transits. The target's diesels would allow the SSK to detect their presence. In the event of hostilities, the American SSKs would ambush Soviet submarines leaving their ports, when they would be at their noisiest, snorkeling at high speed to make good the long distance.

Refitted with the latest American ASW technology, Cavalla was ready to serve her nation in the Cold War.